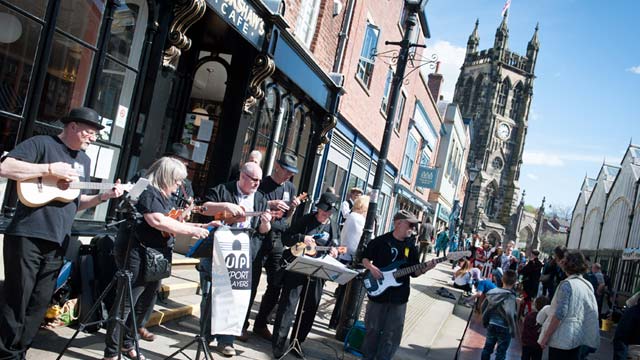 Stockport is seven miles out of Manchester or just seven minutes away on the fast train from Piccadilly Station.

This short journey offers a panoramic vista of the town from the lofty heights of the famous viaduct, a major feature of Victorian engineering constructed of 11 million bricks, making it one of the largest brick structures in the world.

Stockport has its fair share of unique and landmark buildings from the contemporary blue glass pyramid, overlooking the M60, to the iconic 1930s Plaza Super Cinema and Variety Theatre with its distinctive red neon sign. It is one of the finest examples of Art Deco cinemas in the country.

While the town is more traditionally known for its industrial history and heritage celebrated in attractions such as the Hatworks (the UK’s only hatting museum), the Air Raid Shelters, the country’s largest purpose-built civilian shelter, and Staircase House, the town’s oldest medieval townhouse with its rare Jacobean staircase, it is Stockport’s contemporary history that is now driving the town in a new direction.

As the birthplace of many creative people who have made their mark in the music, art and film Stockport is at last asserting its own cultural identity and emerging out of the shadows of Manchester.

From 1967 to 1993, Stockport was home to the world-renowned Strawberry Recording Studios pioneered by Eric Stewart, of 10cc fame, who named it after one of his favourite Beatles’ songs ‘Strawberry Fields Forever’.

10cc famously recorded their multi-million selling worldwide hit ‘I’m Not in Love’ at Strawberry and the studios influenced popular music on a global scale establishing a reputation as the ‘Abbey Road of the North’.

Perhaps what is less well known is the important role that the town has played in Manchester’s musical history with many of the city’s most famous bands such as, Joy Division, New Order and The Stone Roses recording their early music with legendary producer Martin Hannett at Strawberry.

It is here too that The Smiths recorded their ground-breaking singles ‘Hand in Glove’ and ‘This Charming Man’.

Today the studios are offices and a blue plaque commemorates its contribution to popular music and the Stockport story.

The studio’s 50th anniversary is being celebrated with the exhibition ‘Strawberry I am in Love’, at Staircase House, which has attracted visitors from across the globe [runs until 29th January 2018].

Walking through the large Merseyway shopping centre, with its proliferation of chain stores, you can be forgiven for thinking that this is just another ‘clone town’.

However, quickly you will discover the secret side of Stockport with its cobbled streets, stunning architecture and wealth of independent shops.

It is experiencing a revival in its food and drink with interesting restaurants, ale houses and cafés, such as the 1930s Plaza Café delivering exciting tipples and diverse menus.

The last Friday of each month sees the Market Place hosting ‘Foodie Fridays’ a festival of all things food and drink.

This is street food at its best and you sample everything from a Massaman Curry to a classic pizza accompanied by some excellent local beers.

Celebrating the real ale culture of the town, the ever-popular Bakers Vaults has been joined by The Petersgate Tap, specialising in local craft ales, and Remedy Bar and Brewhouse with its in-house microbrewery, continues the town’s legacy of centuries of brewing tradition.

Just around the corner is Robinsons’ Brewery Visitor’s Centre, a must-see attraction featuring the largest hopnik in the world. Its exhibition documents the fascinating history of one of the oldest names in British brewing history.

Chef Samuel Buckley has opened Where the Light Gets In, to enormous critical acclaim, in an old coffee warehouse. Its name is drawn from huge windows that light the dining area and open kitchen. There is no menu as Sam simply creates dishes from the day’s fresh catch, harvest or slaughter.

The Allotment first opened in Stockport [now at Lloyd Street, Manchester, M2 5WA] this fine dining vegan restaurant is headed up by chef Matthew Nutter and a visit here will certainly excite your taste buds and open your eyes to some amazing vegan dishes.

These restaurants along with the Foodie Friday’s extravaganza have won awards at the acclaimed Manchester Food & Drink Festival.

For film buffs the Stockport Plaza has to be visited and not just to see a film or show, the ‘behind the scenes tour’ gives unequalled access to this fully restored classic era 1930s entertainment venue.