[@]Castlefield the historic start of Manchester 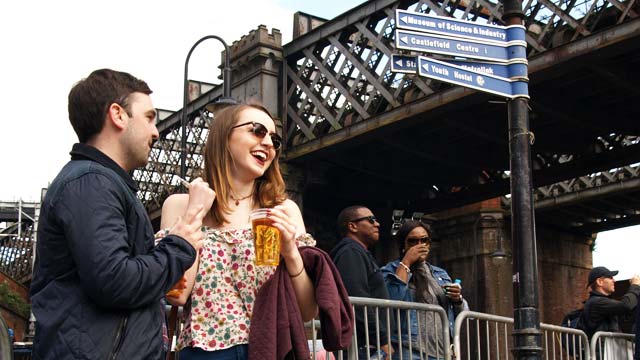 Get a feel for what has helped to make Manchester special

Castlefield derives it name from the Roman fort called Mancunium, established in AD 79 and it is a distinct part of the modern city.

In Victorian times it came to the fore as a working set of docks for barges transporting goods and materials on both the Bridgewater and Rochdale canals.

Those busy canals carried Manchester’s goods, in particular cotton, out to Salford Quays where they would connect through the Manchester Ship Canal first to the port of Liverpool and then the World.

Today much of this infrastructure remains and it been turned into a good place to take a breather from the relentless city and enjoy everything from a pleasant walk to good beer and quality food. Many of the venues have outdoor or canal-side aspects that are very enticing when the sun chooses to shine.

The Roman fort has been partly reconstructed and you can explore the space and buildings at your leisure. You can even enjoy a drink, or some food, at the White Lion with the forts main entrance as the backdrop.

Castlefield has several good restaurants and we can recommend Dimiti’s, on Deansgate, for great Greek dishes, or Per Tutti for Italian farye and Alberts Shed for classic dinning.

Looking for something interesting to drink? Then try Cask, on Liverpool Rd, not only does it offer a huge range of beers and ales it also happens to have one of the best juke boxes in the city.

Castlefield is also home to ‘The Bowl’ a large open theatre, located on the old docks, and it is regularly used to host concerts, events and other public events. Just up the road you will find the Old Granada Studios, these where vacated when the station moved to its new home in Media City, Salford Quays.

This is where the long running British soap ‘Coronation Street’ was filmed and today it is evolving into a space for theatre and exhibitions. There are plans to build a new theatre on the site that will eventually become the permanent home of the much acclaimed Manchester International Festival.

Visit 'The MSI' websiteAcross the road is the Museum of Science and Industry (MSI). The Museums extensive galleries and collections celebrate Manchester as the world’s first Industrial City.

This is very much a hands on sort of museum where you can take a ride on a replica of Stephenson Rocket, explore huge industrial machines and marvel at some the amazing fabric making machinery.

Part of the museum is the original Liverpool Road Railway station that connected through to Liverpool. It was the world’s first twin track railway and much of the tunnelling is still transporting trains between these two cities.

The Air and Space Hall is huge, a former market built in 1882, it exhibits focus mainly on aviation achievements. Here you will a replica of the Roe Triplane 1, which first flew in 1909 or marvel at the sight of the Avro Shackleton a search and rescue plane that could fly for 24 hours straight.

Exploring the hall further will reveal some gems of the MSI transport collection including the 1905 Rolls Royce used by Henry Royce himself. Rolls and Royce met in the Midland Hotel and started their world famous company here in Manchester.

Castlefield is certainly set out to be more relaxing than most of the rest of city with its large open spaces and quiet walkways. However, it offers visitors plenty to engage them and the MSI is a must for a family day out.