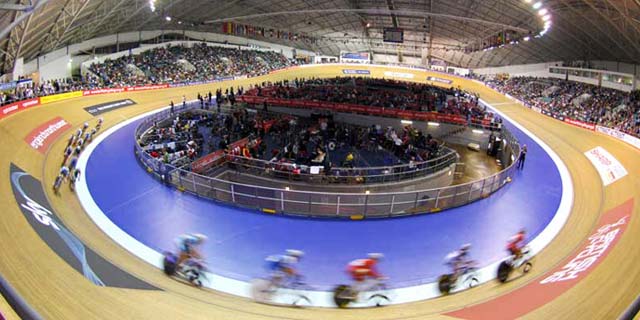 Hosting the Commonwealth Games 2002, left Manchester a powerful sporting legacy which is now home to some of the world's leading football, athletics, cricket, netball, rugby, squash, swimming and water polo clubs and the 'all conquering' British Cycling team.

It boasts National Centres for Cycling, Lacrosse, Squash, Taekwondo and Water Polo. And in East Manchester, Sport-City has the largest concentration of sporting venues in Europe and is less than two miles from Manchester City Centre.

Indeed, it is now the chosen venue for over 400 events each year and receives over 4,500,000 visits annually, and this is just one of dozens of sporting centres across the City.

Manchester is a dynamic city of opportunity and innovation, and its infrastructure can support any sporting event. If you're planning a major sporting event, you should contact the local Governments Sports Events Team at sportsevents@manchester.gov.uk, to find out why Manchester really is 'Alive with Sport'.

Eric Cantona once remarked: "On derby day in Manchester, the city is cut in two. The Blues and the Reds invade the streets, and if your team wins the city belongs to you."
Home to the National Football Museum and one of the biggest one-city rivalries in the world, football is undoubtedly Manchester’s biggest sport. Visitors to the city centre museum can enjoy over 2,500 artefacts including historic kits, and can even get their hands on some famous silverware. Old Trafford and the Etihad stadium are also easily accessible from the city centre and both hold regular guided tours.

Football is not the only sport Mancunians get passionate about, however. Since the city held the Commonwealth Games in 2002, Manchester has become a hotspot for athletes across countless disciplines. From boxing to basketball, Manchester has more to offer than just the beautiful game.

Basketball
One of city’s great comeback stories, the Manchester Giants made a return to professional basketball after a 10-year absence from the sport. Originally founded in 1972, the team grew to attract crowds of up to 15,000 at the Manchester Arena during the height of their fame.

High renting costs forced the Giants to relocate to the then undeveloped Sport City zone during the 2000/2001 season, however, and poor transport links saw fan attendance dwindle. The club, once the UKs biggest, folded just nine games into that season.

In 2012, former player and coach, Jeff Jones, took the name and launched a new team with a focus on finding local talent. The Manchester Giants are now once again the city’s premier professional basketball team and play at the Trafford Power League Arena. With community spirit at its heart, the club also run training academies with several colleges across Greater Manchester.

Cricket
Opened as the home of the Manchester Cricket Club in 1857, Old Trafford is England's second oldest test venue.

The club became Lancashire County Cricket club in 1864 and the venue is now one of the country’s most famous grounds. Just a five minute walk from Old Trafford football stadium, the venue was the first to hold an Ashes test and plays host to one of the sport’s most famous rivalries in Lancashire vs Yorkshire.

Also used for concerts, the ground has undergone extensive redevelopment work since its humble beginnings and can now hold up to 65,000 people with additional seating. Up to 26,000 cricket fans take to the Brian Statham End or the Pavilion, which was rebuilt after being bombed in 1940, for international matches.

Cycling
The National Cycling Centre was Britain's first indoor Olympic biking facility when it opened in 1994. From professional athletes to complete novices, the centre is used seven days a week and is one of the busiest in the world. With a velodrome, BMX arena and outdoor mountain bike trials, the centre is a must-see for all cycling enthusiasts in Manchester.

The 3,500 seater velodrome is regularly used for world championships and major races. The BMX arena, which opened in 2011, is now used by both Team GB and local enthusiasts. The professional track begins with the only eight metre start hill in the UK and has been described as one of the toughest in the world.

Olympian BMX rider Liam Phillips even relocated to Manchester just to be near the track. Held in nearby Clayton Vale, the mountain bike trials are for riders of all abilities and there is even a Skills Zone to practice before you take to the great outdoors.

Athletics
The 2002 Commonwealth Games saw Mancunians develop an appetite for track events and the Great Manchester Run was established the following year.

The annual 10k through the city centre, Trafford and Salford is the biggest of its kind in Europe. In 2009, the Great City Games was added to the event. Televised by the BBC, the event takes place on Deansgate in the heart of the city, and at a purpose built arena in Albert Square. Elite athletes such as Usain Bolt and Jessica Ennis-Hill have both competed in the competition.

Speedway
Established in 1928, Belle Vue is home to one of the UK’s oldest speedway clubs. Riders originally raced at Greyhound Stadium before moving to the purpose-built Hyde Road track in 1929. These days, the club boasts the £8million National Speedway Stadium which was completed in March 2016.

The 6,000 seat facility stages both national and international contests, and is home to the Belle Vue Aces and Colts.

Boxing
A city once associated only with football and music, Manchester is now the boxing capital of the United Kingdom. With three world champions from Greater Manchester, Tyson Fury, Anthony Crolla and Terry Flanagan are leading the way for a new generation of fighters. Boxing gyms have sprung up across the region and the Manchester Arena has hosted some of the sport's biggest contests.

Rugby
One of Manchester’s most successful rugby clubs is also one of the oldest in the world. Founded in 1861, Sale Sharks were in action over a decade before the formation of the Rugby Football Union – the sport’s governing body.

The club, who play at the A.J. Bell stadium in Salford, have been one of the leading names in northern rugby union throughout their history. In the amateur division, the Manchester Village Spartans are also popular in the city.

The Spartans play at Sale Sports Club and were the UK’s first and world’s second gay rugby team. Formed in 1998, the Spartans are one of the UK’s only standalone gay teams not to be affiliated with a professional club.

Trafford Village
Trafford Quays Leisure Village could be the perfect place if you fancy trying something a little out of the ordinary in Manchester. Located just a stone’s throw away from the Trafford Centre, the Leisure Village is packed with activities that can be enjoyed on a tight schedule.

At Airkix, the UK’s biggest indoor skydiving tunnel, visitors can experience the feeling of a freefall in a 39ft air column. If extreme sports aren’t for you, the Trafford Golf Centre is just around the corner. Visitors can brush up on their technique with coaching sessions or simply enjoy the driving range.