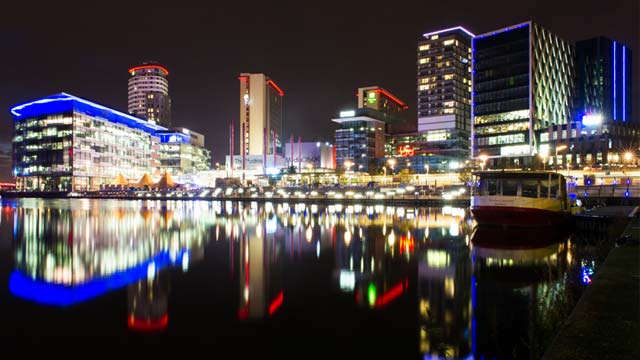 Salford Quays was originally part of the Victorian expansion of the Manchester Ship Canal, it opened at the end of the 19th Century to provide improved cargo services and warehouse storage for the bustling world trade centre that was Manchester or Cottonopolis as it was known.

However, by the time that containerisation became the shipment method of choice, the Manchester Ship Canal simply was not deep enough to support the colossal new ships. By the end of the 1970’s the docks were in decline and finally ceased operations in 1982.

Salford Council acquired the land in 1983 and with the help of new investment and a major redevelopment plan the space was rebranded ‘Salford Quays’ and ground was broken in 1985.
The docks were modified to create new internal waterways, bridges, roads and houses were built and the Lowry Arts Centre was established at the end of Pier 8.

Today the whole area is a major visitor attraction; within its spaces you will find the Lowry shopping mall complete with a cinema and bargains galore, the Imperial War Museum, the iconic Old Trafford, home to Manchester United, art galleries, bars, restaurants and the Lowry Theatre.

Further investment has brought the much-heralded Media City, the UK hub for television and radio, to the Quays. Opened in 2011 it is now home to both of the UK’s national television broadcasters the BBC and ITV.

The city centre Granada TV studios ceased television production in 2014, this required recreating the world famous Coronation Street in a purpose built waterside complex; if you get a good vantage point, you can see the chimney pots poking over the top.

The BBC offers guided studio tours of their lots and facilities, you may even get the chance to make your own news or weather bulletin in an interactive studio (www.bbc.co.uk/showsandtours). Major shows such as The Voice and Countdown are also filmed here for which you can get free tickets if you apply in good time.

With this new lease of life, restaurants and bars seem to appear overnight, the Dockyard, Damson and Pier 8 currently leading the way.

The Quays are full of contemporary architecture, with the Lowry Theatre or across the water the imposing Imperial War Museum and when dark falls the whole area looks like a massive Christmas tree.

Visitors can explore the permanent sculpture trail around the Quays. The art animates the rich industrial history and tells the stories of the men and women who lived and work on the docks.

The Lowry Centre has a permanent display of local hero L.S Lowry’s work and hosts a calendar of rotating exhibitions. Its 3 theatres are used for national and local touring shows and productions.

The IWM looks at how war continues to shape people and their lives. Visit its huge galleries and watch the large video installations that focus on the historical impact of war on the nation. You will be moved by the personal stories of the serving forces and their families left at home.

Sport is synonymous to the area with The Quays being home to Salford Watersports Centre, Manchester United Football Club and is a stone’s throw from Old Trafford Cricket Ground.

All this is merely a 15 minute tram ride from Manchester’s city centre, making it one of the top places to visit while in Greater Manchester.