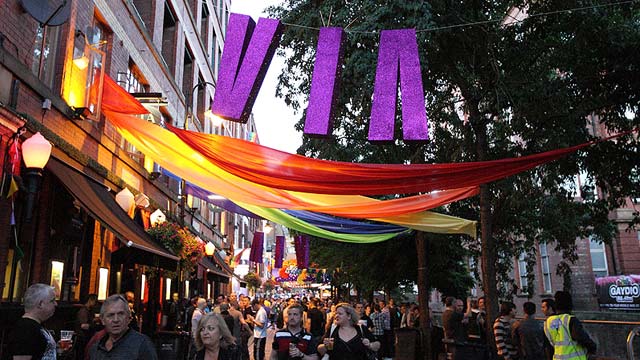 The World famous home of 'Queer as Folk'

Diversity is such an important part of what makes Manchester so special. This is the main reason why the city’s heart beats from the Gay Village. Always bursting with life and celebrating individualism, Canal Street and its surrounding areas has really come to epitomise what the city is truly about.

Situated just off Portland Street, the space is home to everything gay, lesbian, bisexual and trans. The location has been expanding rapidly since the early 1990s when the first bar, Mantos, opened its doors on Canal Street and welcomed in the LGBT community. Since then the spot has grown to include nearby streets such as Sackville Street and Richmond Street.

The place is a gem, not just in Manchester, but in the whole of the UK. So it’s no surprise that it’s managed to seep into pop culture in more ways than one. Queer As Folk, the groundbreaking Channel 4 show, was based here before later making waves on American television. The UK’s longest-running soap, Coronation Street, has also filmed scenes around the area to advance some of their most high-profile storylines. It’s even rumoured that The Smiths’ single ‘How Soon Is Now’ is about lead singer Morrissey’s experience in the Village.

There’s never a bad time to visit the Gay Village. Day and night from spring to winter there’s generally something going on. In fact, it’s possibly the one spot in the city where you’re guaranteed fun regardless of the time or season. It’s not uncommon for crowds to head there from the early afternoon, especially during the summer months. Often the tiniest bit of sun will bring revelers meeting by the dozen to socialise by the waterside.

You can’t go wrong by following the rainbow flags. But by the time dusk sets in a number of the streets are illuminated by fairy lights. These bulbs go hand in hand with some of the city’s most colourful characters who strut below them on a nightly basis.

Visit 'The Molly House' websiteWhile being LGBT inclusive, the Village makes a point not to be exclusive. People from all walks of life pop by, no matter their age, sex or ethnicity. It’s true that different sections may cater towards a certain clientele - such as Vanilla that has a female-inclined door policy. Other venues, like The Molly House on Richmond Street, tend to fill up with less rambunctious punters. With so many options it’s simply a matter of preference.

It’s not an overstatement to say that the Village has everything. Thirsty? There’s too many bars to name. Hungry? Well sit yourself down at one of the many restaurants. Tired? Check-in to a B&B and rest comfortably. That’s without even mentioning the sex shops and saunas that are sure to arouse the curiosity of any passerby.

Without question it’s the nightlife that brings the majority of people into the area. Canal Street alone is lined with clubs open until the early hours of the morning. One staple, G-A-Y, is perhaps the most recognisable thanks to its sister club in London. This dimly lit hotspot gets going early on thanks to its bargain drink prices that run throughout the week.

Find Bar Pop on FacebookVaried opening times keep the crowds coming all night long. On select dates some of the venues keep their doors open until the early hours of the morning, including Bar Pop and Void, which has been known to kick people out at 10am. Obviously it’s not for the faint-hearted – you’ve been warned.

The Gay Village was built in response to the LGBT struggle - and to this day there is a prevalent community spirit. Throughout the year this manifests itself in numerous ways. The most prominent way that it exists is through Manchester Pride. Held annually every August, this four-day event celebrates sexuality with an outrageous parade and live music. The festival stems from movements in the late 80s and early 90s and now attracts thousands of people over the Bank Holiday weekend.

Visit Manchester Prides' WebsiteWhile Pride only comes once a year, the community is known to react to issues, both on a regional and international level. In February 2014 the Village made headlines when they staged a mock Olympic Opening Ceremony in response to the President of Russia, Vladimir Putin. People came from near and far to have their voice heard while opposing anti-gay legislation by marching through the streets.