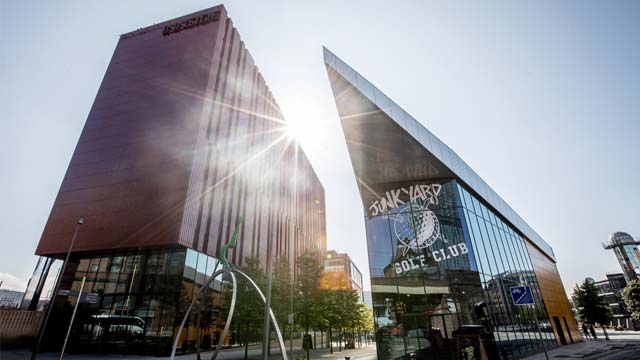 First Street is part of the southern border of the city centre, however this can be misleading as it less than 5 minutes walk from St Peters Square, one of the city’s main Metrolink hubs, and Piccadilly gardens is only 3 minutes from there.

The site’s footprint is fairly large and from 1825 it was home to the vast Gaythorn Gas Works. Gas was produced there until 1929, when the site was converted to a gas distribution centre, and it was finally closed in 1953.

The works were eventually demolished and the office block, known as Number One, was constructed with its first occupant being The British Council, in 1992, and subsequently British Telecom.

The modern incarnation of First Street really has its beginnings in 2007 when Number One underwent a complete refurbishment.

The site was muted as a possible new home for the BBC and when the ITV Granada Studios closed both broadcasters moved to Media City  in Salford Quays.

In fact the whole area is somewhat of an entertainment district, with the Bridgewater Hall opposite and Deansgate Locks across the road, with its bars, food offerings and the Manchester Comedy Club.

At the centre of First Street is Tony Wilson Place, named after the famed Manchester TV personality, Hacienda night club owner and originator of the phrase, “We do things differently here,” in praise of the city he called home.

Here you will find the Manchester institution that is HOME, in its purpose built £25million complex. It has five cinema screens, two theatres, a large art gallery with a calendar of changing exhibitions, exploring international contemporary art, and a restaurant and bar.

HOME was created by the merger of two of Manchester’s best cultural venues The Library Theatre and independent cinema Cornerhouse. With the doors opening in 2015, HOME has proved a very popular destination for mancunians. It delivers exciting productions, world cinema and thought provoking art exhibitions.

Soon after its opening it was joined by the 4 star Melia ‘Innside Hotel’ and its unmissable red cladding, in contrast to Home’s Dark Blue. This ten storey building towers over First Street.

The district has grown rapidly over the last two years and has attracted some of Manchester’s more interesting food and drink entrepreneurs.

The Laundrette serves great sharing boards, burgers and pizzas, not to mention their cocktails (try the Rum Passion) and the The Liquor Store is classy, smart and sassy with cocktails galore!

MasterChef winner Simon Wood opened his first restaurant on Jack Rosenthal Street in 2017, expect a fine-dining experience in a relaxed and stylish atmosphere. Simon’s seasonal menus are a modern interruption of traditional flavours.

Kettlebell Kitchen is all about being healthy and its concept of serving up clean ‘Fast Food’, think fresh, natural and nutritious and it has been a success with Manchester’s foodies.

Adding to the attractions at First Street is Junk Yard Golf; this is a real treat for those looking for something different. Yes it’s a bar but it also happens to have three nine hole ‘Crazy Golf’ courses constructed within it.

This is a lot of fun, try for a hole-in-one on the Skull Carousel, and it can make a great icebreaker for a group night out.

The Gas Works, now you know why it’s called that, is a modern large bar that serves food and has its own in-house brewery.

Should you be travelling to Manchester by car it is worth knowing about QPark, located within the district, that offers some of the best value car parking in the city.

As for the future, it is looking good for First Street with more buildings being erected you can expect further development and added attractions to this exciting new quarter in Manchester.