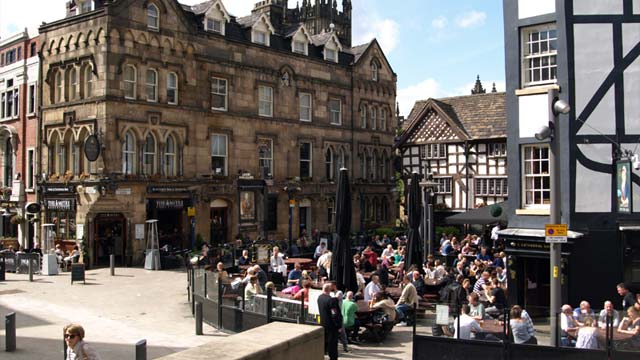 Manchester’s Exchange Square was created out of the ashes of the 1996 IRA bombing of the city centre.

Its reconstruction included a complete structural relocation, some 300 meters, of Shambles Square, home to Sinclair’s Oyster Bar, The Wellington Pub and now The Mitre Hotel, to its current location within Exchange Square.

The Square has tiered walkways that are used for audience seating and standing when events are held in the space. There is a large free following water feature, cutting east and west across the square, and the space is adorned with two huge metal sunflower like sculptures and coal wagon structures.

The Square serves as access to many key attractions in the city centre. Selfridges, The Arndale (one of the most visited shopping centres in the United Kingdom) and St Anne’s Square all offer great high street and designer shopping experiences. New Cathedral Street offers high-end luxury brands such as Louis Vuitton, Harvey Nichols and Burberry.

The newly re-opened Corn Exchange offers a wide variety of quality dining including Gino D’Acampo’s My Restaurant, Cabana, Mowgli and Pho. No matter what cuisine you are in the mood for, the Corn Exchange is going to try it’s best to help.

Once a newspaper publishing house, The Printworks is packed with fun and entertainment venues serving food and drink before visiting the huge IMAX cinema in the Odeon.
Next door to the Printworks is the National Football Museum in the Urbis Building, a serpent like glass and steel edifice soaring into the sky. Its three floors of exhibition space celebrate Britain’s national game and it has the world’s finest collection of football memorabilia and artefacts along with many interactive displays.

Behind the Corn Exchange is Manchester Cathedral, started in the early 15th century, it became a Cathedral for the newly formed Manchester Diocese in 1847 and it was extensively renovated in 1882. The latest major work was to install under-floor heating in 2013.

The cathedral is in regular use today and is often host to music performances from both classical and pop artists while its gardens are particularly attractive during the summer.
Just beyond the Cathedral is another new refurbishment, Victoria Station, it’s worth popping in to view the large railway map wall mural, and Greengate Square is an open public space used for outdoor entertainment and home to the Grindsmith coffee pod.

On your way, look at the Chetham’s School of music who’s history dates back to 1420s as a building which housed priests from the nearby Cathedral before Humphrey Chetham founded a charity school in 1653. The building became the independent music school it is today in 1969.

The Manchester Metrolink found Exchange Square in December 2015 and visitors can now catch connections out of the city to Oldham and Rochdale with more routes opening throughout 2016/17.