The impact Manchester has had on the modern music genre cannot be understated. Looking back through the decades reveals bands who are still being palyed today across the globe.

The 1960s saw the rise of the first Brit-Pop phenomena with bands like The Hollies, from Salford, and the Manchester band Herman Hermits. Leading into the 1970 with groups such as The Buzzcocks, from Bolton, The Fall and Joy Division.

The explosion of pop in the 1980s saw the rise of legends such as The Smiths, The Stone Roses, The Happy Mondays, New Order and Simply Red.

The arrival of the 1990s saw the second coming of Brit-pop sound driven by a culture of new ideas. Bands became international mega-stars. Oasis release Defiantly Maybe, the Charlatans hit the scene with Some Friendly, while the Chemical Brothers are soon propelled to worldwide recognition as DJ’s and electronic music artists.

Madchester, coined by Tony Wilson, was all about the indie dance/rave scene and refers to groups such as Inspiral Carpets, James and 808 State, formed by Martin Price (then the owner of Eastern Bloc Records on Stevenson Sq).

All supported by night clubs, and probably MDMA, like the infamous Haçienda (FAC51), co-owned by New Order [read Peter Hook’s book ‘The Haçienda - How not to run a club’].

In 1968 the Stockport’s Inter-City Studio was bought by Peter Tattersall who invited Eric Stewart (10cc fame) to join him as a partner. It moved to No.3 Waterloo Rd and was renamed Strawberry Studios (in honour of Eric’s favourite Beatles song).

Here 10cc recorded much of their catalogue. Popular with other major artists including Joy Division, Neil Sedaka, Barclay James Harvest, the Smiths, The Stones Rose, The Moody Blues and Paul McCartney.

Look for the studio of the recording on sleeve and Stockport’s Strawberry Studio is a recurring location.

So, you may not be surprised to learn that the city has a number of good second-hand record shops, and incidentally the only second-hand tape cassette shop [marstapes.co.uk / 3rd Floor, Afflecks, Church St].

Back in the 1970s I was buying second-hand records and there where a few shops that happy hours could be spent flicking through racks and crates of used albums.

The returning interest in physical media must have been a shock to many, with it being so easy to create a fab Spotify list.

That for me, and I suspect others, simply fails convey the sense of personal reward of discovering that elusive album or rare record for which you’ve been long searching.

Now it’s a matter of the important questions: Which issue is it, What’s the sleeve condition, Is the poster intact and Does it even play well?

Needless to say, the cost of some these rarities can be overwhelming. Some years ago I was lucky enough to replace my long lost copy of Power, Corruption and Lies (New Order) in the original die-cut sleeve for a mere £50...

Collecting these items can be time consuming, and costly, however while you are in Manchester, or Madchester, it would seem a good idea to at least spend a while routing through some record racks.

With all this in mind here are a few of our favourite Manchester based second-hand record shops. 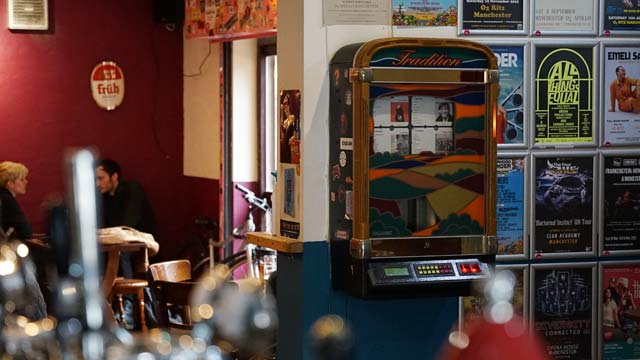 Now this might sound a bit strange, because in this modern age anyone armed with a half-decent mobile device, and enough mobile data, can play music or music videos almost anywhere.

However, for some of us there is still pleasure to be found, and possibly the awe of your friends, should you take the opportunity to stroll over to the pubs jukebox, drop in some cash and make your selection for the next best song to pumped out too all and sundry.

Good choices can be as impassioning as ‘bad’ choices (please no Blacklace), and let me tell you there are plenty of jukeboxes with appalling musical taste out there.

So with this in mind we have gathered together a list of Manchester bars, in no particular order, with what we consider to be excellent musical taste for you to ponder choices over.

The Jukeboxes we have selected are not only carefully curated but they are in interesting bars where the drink is good too, so you cannot drown your, or another’s, poor musical choices with a pint of say Carlsberg (I know some people might like it...).

We have avoided the modern digital jukeboxes as these, in our humble opinion, do not deliver the right ‘experience’ when choosing the next track to play.

Seeing something change on a screen is nowhere as rewarding as watching a clever mechanism rotate, twist and move small panels displaying lists of album tracks and in some cases seeing records actually being placed on a turntable.