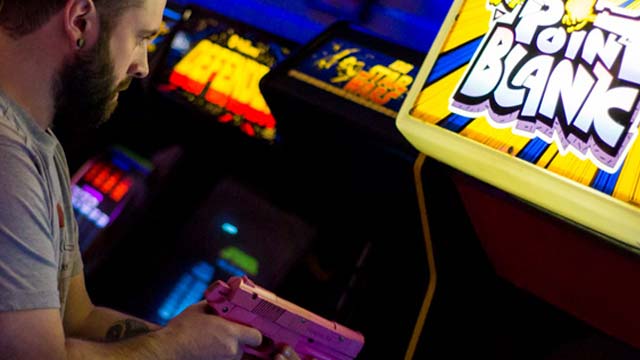 Long before the time of the PlayStation and Xbox, back when handheld consoles were still in their testing stages, game-loving teenagers would save their ten pence pieces for the much-anticipated weekend trip to the arcade where games such as Donkey Kong, Tapper, and Pac Man were the latest in technological advancement.

Today you’re more likely to see these retro games in a collector’s basement as the era of home consoles and virtual reality have taken over.

Yet in an old mill near Bury, mother-and-son-team Linda and Andrew Palmer have ensured the legacy of these games stay alive and have made their private collection playable to the public.

At over 15,000 sq feet, across two floors of this old mill, Arcade Club is Europe’s largest eSports arena with over 400 upright and tabletop games to enjoy plus a selection of classic pinball machines with more gaming cabinets arriving almost weekly.

The games include driving games, classic arcade beat ‘em ups such as Street Fighter and Killer Instinct, right through to gun toting shooter adventures like Time Crisis and Point Blanc - there is even the original Simpsons Game and Michael Jacksons Moonwalker.

And if retro isn’t your thing, then try some of the more modern games including the much sought-after Oculus Rift - the latest in virtual reality.

Entry is £10 for adults and £5 for children (unlimited play), with a bar and cafe serving burgers and hot dogs while you bash out your favourite games. All of the games are ‘free-play’ so there’s no need to scramble for  that elusive change.