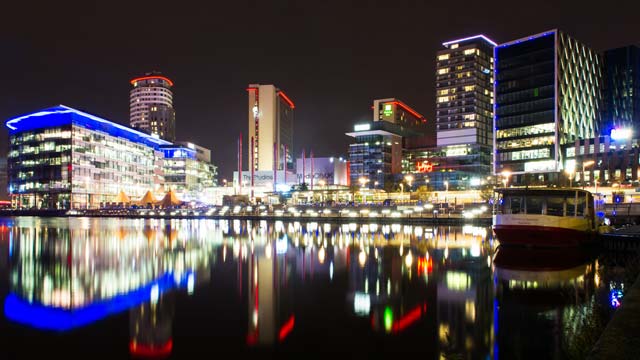 At one time, the docklands at Salford Quays were the third busiest port in Britain, and since their decline in the 1970s they have been redeveloped as the jewel in the North West’s crown becoming a world class destination for culture, entertainment and leisure. With the rise of Salford Quays as a tourist destination and an urban regeneration project, it needs to be seen to be believed.

Expanding from the construction of the Lowry Theatre in 2000, the site now houses some of the most advanced television and film production facilities in the UK, leading museums, Manchester’s only outlet shopping centre, outdoor sports facilities and its most recent addition, the I’m A Celebrity Jungle Challenge.

The Quays host one of the UK’s largest bases of creative industries, with both major UK TV channels having significant bases at the Quays.

Soap fans will enjoy the chance to walk down the cobbles of ITV’s exterior Coronation Street set, the site of the world’s longest running soap opera. A visitor centre containing props, a cafe and a Street-themed shop is due to open in 2022 as part of the resumption of the tours.

Culture vultures will appreciate the options that the Lowry Theatre (Pier 8, The Quays, Salford) offers. The Lowry hosts a wide variety of musical events, plays, comedians and theatre shows with regular touring productions and local companies staging events in the 1,730 seater Lyric Theatre. There is also the chance to see the largest collection in the world of Lowry’s work in their dedicated gallery.

The on-site cafe and gift shop also provides the ideal pit-stop for your exploration of the area before heading to the Imperial War Museum North (Trafford Wharf Road, Trafford Park, M17 1TZ). The immersive displays showcase the IWM’s extensive collection of artefacts exploring the impact of a century of war from different perspectives.

Shoppers will enjoy a visit to The Quayside Mall containing outlet stores for some of the UK’s most famous brands. Stores offering up to 70% off include Marks and Spencer, Next and Clarks so the entire family can shop till they drop. Afterwards, you could catch one of the latest films at the onsite Vue cinema, or enjoy a meal at one of the many bars and restaurants in and around the mall.

In 2021, ITV, in partnership with Continuum Attractions opened the I’m A Celebrity Jungle Challenge spearheading development of the Quayside Mall. The adventure-based challenges in the vein of the popular show are ideal for the family to take on in search of elusive stars for the chance to be crowned King or Queen of the Jungle!

The experience takes around 90-minutes, and there’s even a chance to ride the ‘Spyrider’, Europe’s only indoor powered Rollglider.

Adventure junkies can also take part in outdoor watersports in the Quays at the Salford Watersports Centre (15 The Quays, Salford M50 3SQ). Activities vary, but include sailing, open water swimming, paddlesports and wakeboarding - if you are brave enough to brave the potentially chilly Salford water!