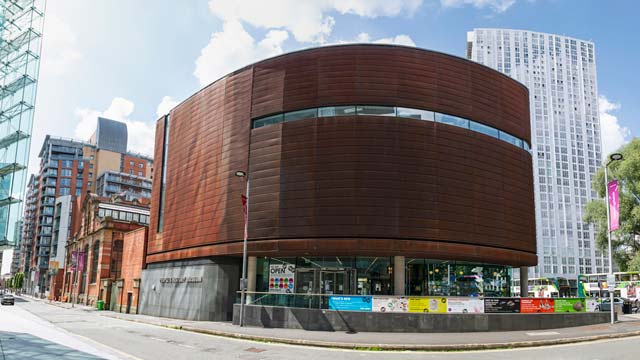 Proudly proclaiming itself as the national museum of democracy, the vibrant surroundings of the People’s History Museum explores the fight for our past, present and future, furthering Manchester’s significance as a cauldron of ideas and radical figures.

Challenging visitors to consider their place in society, the museum’s exhibits ask visitors who they are, the impact of their choice to vote and to consider world-changing ideas such as workers rights to fair pay, women’s right to vote and equality for all.

All are welcome to explore these ideas in a safe and connecting environment. Displays cover trade unionism (the museum is the holder of the largest collection of trade union banners), the women's suffrage movement, the cooperative movement, the 1945 general election and football. Digital interactives and period displays bring the museum’s unique collections and stories to life.

To give an idea of the diversity of the items held by the museum, they range from Hayley Cropper’s red anorak from Coronation Street which highlights the rights and changes to the representation of the LGBT+ community through to a Suffragette banner used by Emmeline Pankhurst during some of her most significant speeches in Manchester.

As well as tackling current ideological theory, the museum looks to the past and has within its collection items relating to the Peterloo Massacre, the infamous meeting at St. Peter’s Field (now the site of the city’s Central Library) which turned into a disaster when the local Yeomanry were ordered to contain the 60,000 strong crowd, killing 15 and wounding over 600 in the process.

An exciting programme of public talks, performances and events add to the displays and take them further and entry is free to the museum, though donations are appreciated. Located at the edge of the Spinningfields district of the city, you could combine a visit to the museum with a visit to the restaurants and pubs there, or take a wander down Deansgate’s shopping area.

To delve deeper into this topic, why not consider a visit to the Working Class Movement Library (51 Crescent, Salford, M5 4WX) in Salford. Based in a former nurses’ home, the atmospheric surroundings of the Library hold some of the earliest trade union documentation to have survived. You’ll find the walls not just full of books but covered in posters, paintings and other visual material to represent the diverse voices of the working classes.

Manchester held a programme of events on the 200th anniversary of Peterloo in 2019, reigniting interest in the circumstances of and lessons learnt from the massacre. Central Library (St. Peter's Square, M2 5PD) holds a unique archive of documents relating to the event which you could explore in the surroundings of the incredible domed Wolfson Reading Room.

Meanwhile those with an interest in the Suffragette movement shouldn’t miss The Pankhurst Centre (60-62 Nelson Street, M13 9WP), the only museum dedicated to telling the story of women’s right to vote. You’ll find a recent exhibition showing the domestic lives of the Pankhurst family and how they began their movement from that very building.